Note: this is reposted from an old blog that I was working on shortly before creating Zonelets!

Electro Man is a DOS game by the Polish company X LanD Computer Games that was originally released in Poland under the (much better) title "Electro Body". The fairly new company Epic (then, "Epic MegaGames") released the game in the US with updated graphics and the new title in 1993. It was well-received in its native country and was seen as a landmark in the field of Polish game development. 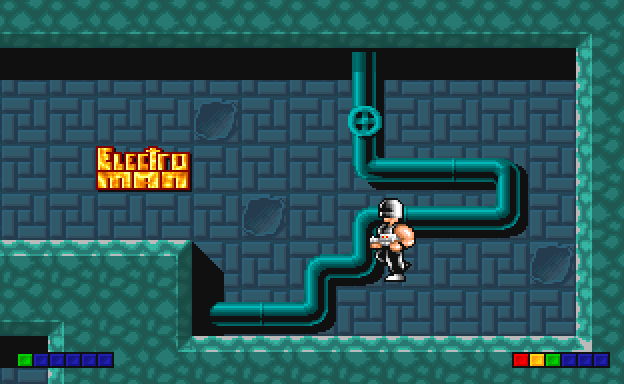 There are a bunch of Electro Man logos on the walls here... is this like his corporate office?

The main character is presumably inspired by Robocop (1987), and his goal is to collect 3 computer disks in each area to unlock the exit and proceed to the next level. He can walk left and right, jump, and shoot a weapon that is upgraded through several increasing power levels by collecting batteries.

In my short time with Electro Man (I've only played a bit past level 1 so far), a few things stuck out to me:

No mid-air control. If you are moving left/right while you begin jumping, you jump in a fixed arc in that direction. The only thing that changes your arc is if you hit a wall or hit your head on the ceiling. So there are many times when you have to be very careful about where you begin your jump so as to not overshoot where you want to land. In level 2, you must jump between landmines and the limited controls makes this a tense affair. There's a neat part where the low ceiling shrinks your jump arc in a way that actually makes a very difficult jump between two mines easier. 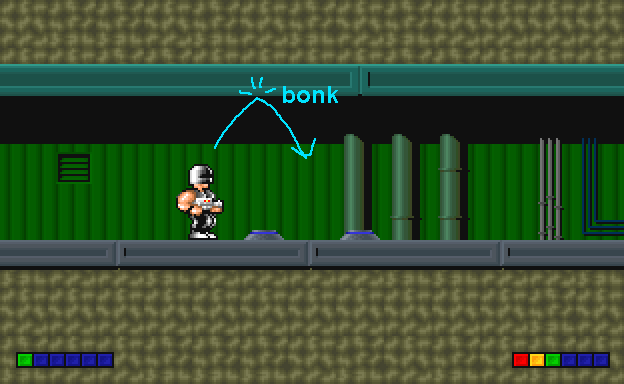 Checkpoints reset weapon level. When you first start up the game, you can't shoot at all! Collecting your first battery grants you a small, short range laser attack. Further battery upgrades grant you longer range and a wider shot making it much easier to hit dangerous enemies before they hit you. This makes a big difference, because Electro man will always die in one hit! However... when you finally hit your first check point and breathe a sigh of relief... it resets your weapon level to 0, meaning you are completely defenseless once again! For Electro Man, strength and weakness, danger and safety are always in flux. Level 1 is fairly non-linear and several paths dead-end at batteries. Batteries themselves do nothing to further your overarching mission, but they provide a nice counterbalance to the disappointment that you'd otherwise feel running into dead ends while trying to find the all-important disks. Having a high weapon level is nice but unnecessary, so when you inevitably die and are reset to level 0, you can just avoid the dead ends and get the few batteries that are closer to the main path while heading directly to your true goals. 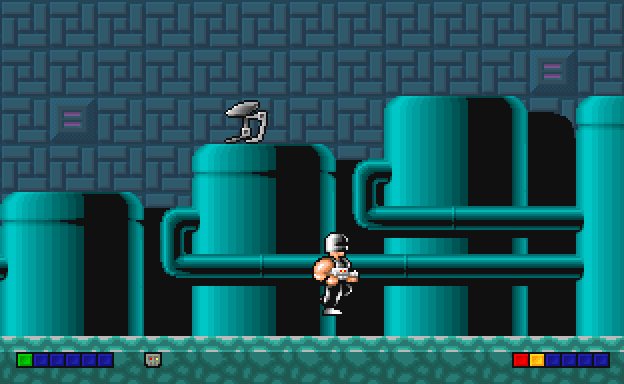 Electro Man has great presentation. The clunking sounds of walking and landing fit well with the controls and character design, giving an effective feeling of directing a somewhat ponderous metal guy around industrial locales. The backgrounds employ a pixel art technique that I find very DOS-y: creating gradients with LOTs of colors of a very consistent hue, like on the large boiler-like objects below (as well as the body of the small walker enemy and Electro Man's helmet). This is the kind of thing that Pixel Artists decided was very bad and wrong and so you don't really see it as much any more. The big black shadows contribute to a nice noir vibe. 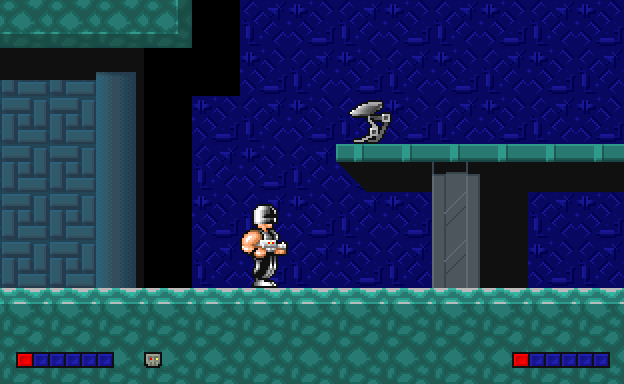 Partway through level 1, the enclosed gray bricks open out onto an abstract circuit-boardy background of a beautiful deep blue color. These colors have such a classic computer vibe. It's funny how colors date and place visual media, based on what pigments were available to old painters or like how an operating system and computer hardware were built. 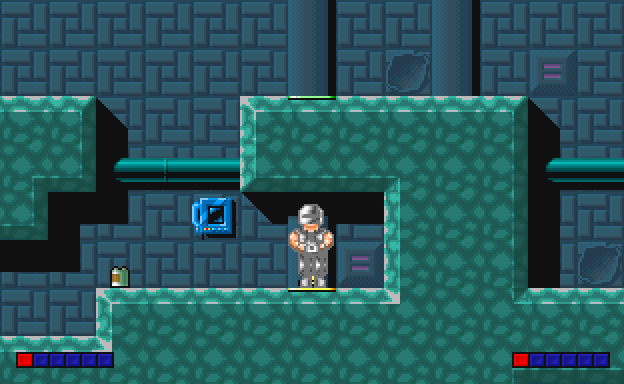 Electro Man comes across various yellow teleportation pads that generally warp him along the Y-axis only (directly up or down), sometimes within the same screen, sometimes several screens away. He exits warp onto green exit pads. Constraining the warp to the Y-axis is a nice design choice, because even when you are teleported to completely unfamiliar, distant locations, you are still gaining a clearer and clearer picture of the structure of the map as a whole. Exploring isn't just about having lots of physical locations to go to. It's more fun when you can make educated guesses and experience a push and pull between your expectations and discoveries.

By the way: it's easy to play Electro Man and many other DOS games on Windows! I'm using the great program D-Fend Reloaded. 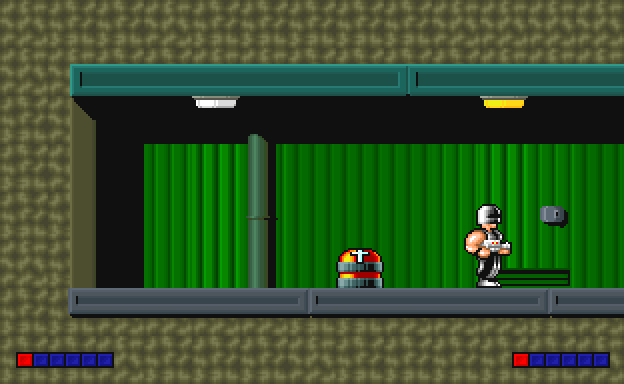 Electro Man's checkpoints appear to be little orange podiums with a white cross emblazoned on the top. Is Electro Man a Christian? Perhaps he loses all of his weapon levels because he is repenting of his violent ways at the altar of Christ. This "saves" his soul, just as it "saves" your progress. But is there really true repentance in Electro Man's heart if he fully intends to go right on back to collecting batteries... right on back to shooting flaming triple-shots? Ultimately, only God can be Electro Man's judge.