Note: this is reposted from an old blog that I was working on shortly before creating Zonelets!

I'm working on an old school JRPG in OHRRPGCE and I decided to check out the original Final Fantasy for fun and research. So far, I just re-sparkled the first of 4 ORBs. Growing up, I thought of the Playstation era as peak FF, although at this point I've also played some or all of 4,6,10, and 13.

I've been trying to abide by the limitations that I think will create the most interesting experience for me, while skipping over tedium that would get me to check out entirely. Here are some notes about my play experience. 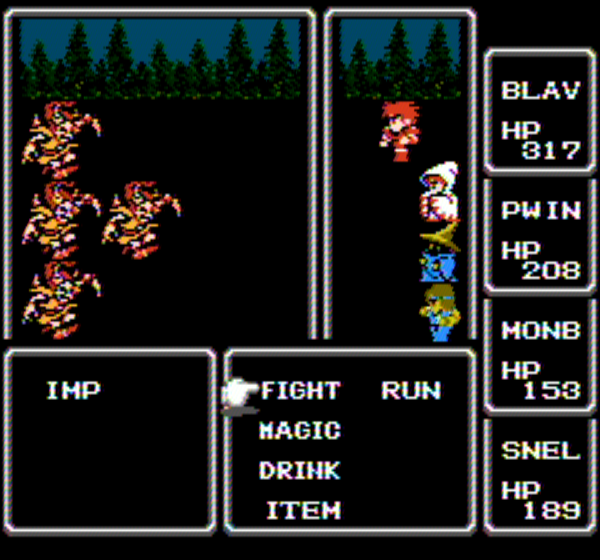 I feel like I've learned a lot from playing this game! The spell structure, the map design, the art, and the battle design all work together really beautifully to create cool little stories. That said, I do feel like there are some big issues with the design thus far. Whenever I'm not explicitly grinding, I find that it's preferable to run from pretty much every fight that you can. As far as I can tell, it's simply not worth it to kill enemies when you're trying to explore or defeat a boss. So it feels weird and inconvenient to spend such a large proportion of the playtime selecting "run" with each character and hoping to get away. I do like how deadly the dungeons are overall, though. They are really spooky and it's beneficial to take the bigger ones in multiple goes. First, you scan for treasure and the staircase to the next floor, then you might return to the surface to save your haul and restore your spell slots at the inn. On the next trip you can beeline to the staircase (if you remember where it is correctly) and keep it going. But yeah maybe it would work better if 1) escaping was less effective, 2) slightly fewer encounters, 3) slightly easier encounters. So the balance shifted a bit more in favor of fighting instead of fleeing, without overwhelming the player in repetition and a feeling of wasted resources.

I think I might be ready to quit though. Although I thought that earlier and I came back to the game. There's something so meaty to the core of this game. It may be simple and there are some actions that are tedious to repeat over and over (I tried but failed to make a macro that would select "run" for all characters) and yet it's really satisfying to make progress! We'll see…

Some other notes I want to jot down but not fully write out in essay form: