I recently played a short game called dandelions by lotus, and it got me thinking about "collage" style art processes. I don't have any insider knowledge about how dandelions was created, I'm just using the final result as a sort of jumping off point for other musings. I hear there is a process post forthcoming, so I'm looking forward to that!

Collage is "an assemblage of different forms to create a new whole" (wikipedia), which is vague enough to mean a lot of different things, but generally it's easy enough to agree on whether something is meaningfully "collage-y". Collage often uses found elements (classically: magazine clippings), although a collage could be made entirely of authored elements, e.g. Eric Carle's The Very Hungry Caterpillar. But to some degree, the elements are non-bespoke: at the time of creation, it is to some degree unknown how and where the elements will fit into a final piece. The elements also maintain some perceptible qualities of their separateness. As an opposite example, most textured 3D games use photos in the art process. But those photos tend to be edited and presented in such a way that they are subsumed enough into the general art direction of the game to not feel like collage. We could theoretically talk about collage as it relates to audio or other game elements, but here I will stick to talking about graphics.

Now and then I daydream about making collage style games. I'm fascinated by old clip-art, game art, icons, photos, etc. As an individual, one can't learn how to create every possible image, and the idea of wielding various evocative elements that are sort of beyond one's control feels very interesting. It's also easy to imagine that collage will be a relatively breezy, chill workflow, because you don't have to make each element from scratch but rather "throw together" some random stuff. But every time I set out to make a collage-y game, I either give up or just make non-collage graphics! I think this plays into what I was talking about in my older post, Artistic craft beyond rebellion. Collage is associated with alternative and outsider art, because it less clearly shows off canonized image-rendering skills. But digging a little deeper, we can see that there are a lot of interesting ways that collage intersects with the particularities of its artist. It is not really as "automatic" or "premade" as it might seem!

Note: one might propose that the different graphical styles of Anodyne 2 are collage, but those graphics were generally created with bespoke methodology and used in self-contained sections. I would call it pastiche rather than collage.

Why do I feel "bad at collage" and give up on or change directions in these projects? I think it has to do with what I will call the "arbitrary threshold": the amount of perceived arbitrariness one can accept in one's decision-making process before it feels too chaotic to proceed. Put another way, it's harder to have executive function while doing tasks that feel arbitrary. My guess is that one's arbitrary threshold has a lot to do with one's general personality and predisposition to spontaneity. Of course, a person's arbitrary threshold would also vary between different activities and goals (it is easier to be arbitrary when asked to scribble on a paper for a mindfulness activity). I would say that I have a low arbitrary threshold and that I'm a non-spontaneous person who pretty much always wants to know why I'm doing what I'm doing. I also have a lot of very entrenched processes for image-making from many years of various artistic practices. So it tends to be easier to jump ship to some other process that I've developed rather than to work my weak collage muscles.

What are the tasks involved in collage? Finding and choosing play a large role! One must have some pool from which to draw elements. If you're clipping from a magazine, you will be limited by the images in the magazine. However, the internet has essentially infinite images. So you need to narrow your options in some way or else contend with rising "arbitrary levels" ("Why am I using this photo of a beetle vs any other???"). I believe Clickteam's game engines had some sort of associated clip art library bundled with them (For example, this clip art is collaged in the game The List). I'd imagine this limitation—a set of images associated with a specific game engine—could be effective in lowering the felt arbitrariness of one's decisions. However, you will still have to make decisions about how much to edit that art, or when you might look outside that pool or create custom assets. 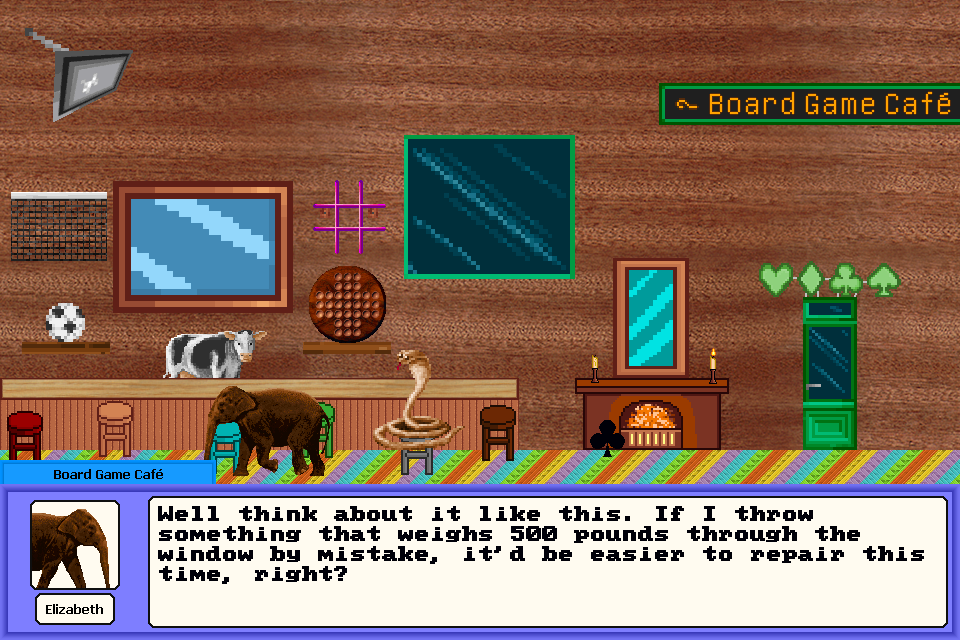 Collage is sort of like being a film director. You can have input into which actors are cast and try to create a situation in which those actors can succeed. But at the end of the day you must let the actors do what they will do.

Even though collage could be seen as beginner-friendly, there are other beginner-friendly methods that are very different. For instance: bitsy games and flickgames tend to have bespoke graphics, very much not collage. However, they drastically limit things like resolution and colors. These are alternate ways of shielding the creator from overflowing their arbitrary threshold. It's not so much that collage is more arbitrary than bespoke or vice versa. Rather, the more opinions you have in the realm of an artistic decision, the less arbitrary you will feel. And these opinions are formed from all aspects of your life—not just making or evaluating art. I say "opinion" but really this could include subconscious emotional/physical reactions and drives. Thus as an entry into game graphics some people might find it easier to take a collage approach while others gravitate towards a "limited bespoke" approach and it may or may not be easy to tell why. 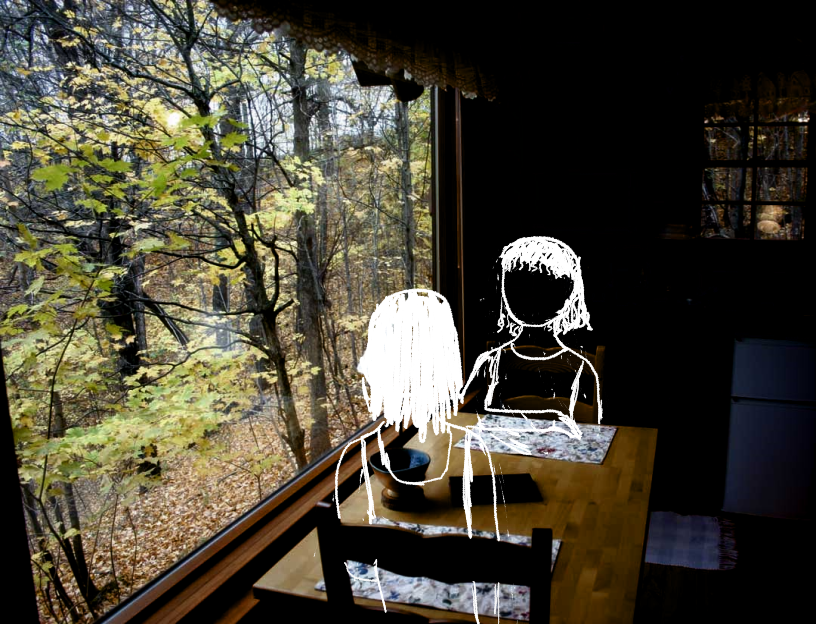 dandelions is a short game, but long enough that it spends significant chunks of time in a variety of distinct sections. There aren't many mechanics, but the visual perspective drifts gently between evoking visual novels, point and click adventure games, and classic rpgs. The backgrounds tend to be photography, the characters sketchy drawings. Occasionally, however, RPG maker tiled pixel art is used. The RPG maker tiles often coincide with the most surreal and surprising elements of the text—this resonance implies a level of thoughtfulness in that the tiles were not exclusively used to solve "practical" problems of visual depiction. Structurally, there's almost a feeling as though the tiles are at first brought in to solve a practical problem, but then sort of "corrupt" the gentle, "natural" feeling framing story with their surreal videogamey-ness. The result is a sweet and satisfying human story with a sort of built-in destabilizing lens—in this sense it is reminiscent of the contrasting and converging stories of If Found... from earlier this year.

Do you like collage? How spontaneous do you feel in general? Let me know in the comments below!